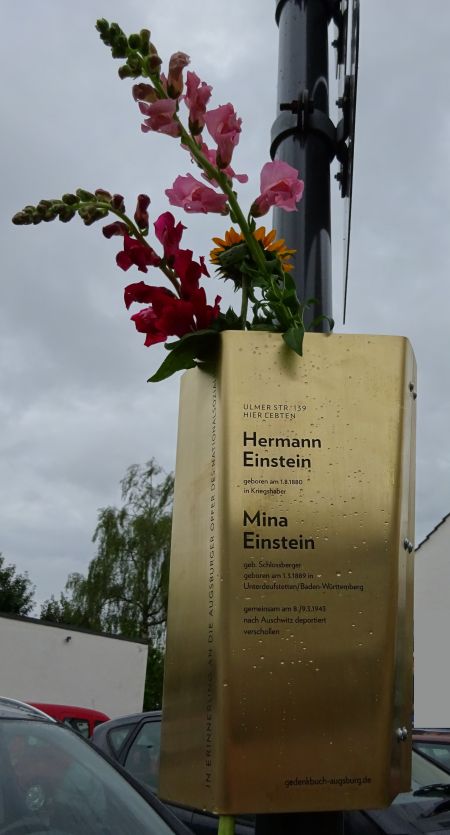 On 29 June 2017, a remembrance post for Mina and Hermann Einstein was installed at Ulmer Straße 139.

Mina Einstein, née Schlossberger, was born on March 1, 1889 in Unterdeufstetten near Crailsheim in Württemberg.1Her parents were Ernestine Schlossberger, née Neumetzger (born December 22, 18622) and Simon Schlossberger (born 18583), who worked as a cattle and goods dealer.4 They married in 1884, and Ernestine had six more children in addition to Mina, three of whom died in early childhood. Mina grew up with an older brother, Siegfried (born June 9, 18875), an older sister Ida (born June 1, 18906) and a younger brother, Sigmund (born 1894). From Unterdeufstetten the family moved to Crailsheim, the nearest town, around 1914. There they lived at Lange Straße 11, on the 3rd floor above a pharmacy.7 However, Mina left her parents’ home three years earlier to marry Hermann Einstein (born August 1, 18808) in 1911. Together with her husband, who came from Kriegshaber near Augsburg, she moved into an apartment at Ulmer Straße 151 in what is now a part of Augsburg.9

Her siblings also left the parents’ home. While Siegfried Schlossberger moved to Nuremberg and married Sofie Feuchtwanger (from Schwabach, born September 29, 1897)10, Ida married Isak Einstein, the brother of Hermann Einstein, in 1912 and also moved in with him in Kriegshaber.11 Mina lost her brother Sigmund Schlossberger during the First World War; he was killed in action as a member of the 8th Bavarian Field Artillery Regiment in France in 1916. Her parents continued to live on Lange Straße in Crailsheim until her father's death on March 3, 1935. After his death, the mother moved to be with her daughters in Kriegshaber12 and lived there in the house of Ida and Isak at Ulmer Straße 185.13 Ernestine Schlossberger also had her husband's body transferred there to be buried in the Jewish cemetery in Kriegshaber.14

Mina's husband Hermann Einstein was a partner in the company Gebrüder Einstein, which was one of the leading cattle trading companies in Swabia. Together with his seven brothers, he was active in the joint company. He ran the company branch in Schongau and was usually away from home during the week. He also owned a meadow in Kriegshaber (Plan No. 372). Like almost all of his brothers, Hermann served as a soldier for Germany in World War I.15 During the war, their daughter Brunhilde was born on January 30, 1916.16 She attended the Maria Theresa School in Augsburg from 1926 to 1933.17 During this time, the Einsteins’ cattle trading business was doing well. And even after the National Socialists came to power in 1933, the Einstein brothers were initially able to continue their trading business despite calls for a boycott. Although there were no attacks either during the April boycott in 1933 or later, they had to deal with ever greater losses in sales.18 From mid-1937 on, Mina and Hermann Einstein lived at Ulmer Straße 139 in the apartment of Ludwig Einstein who had died the year before.19

Despite the discrimination by the government, the Einstein family did not feel seriously endangered due to the positive social environment in Kriegshaber. They trusted in the family's good reputation and therefore did not plan to emigrate. After the November pogrom in 1938, the financial pressure on the family business grew. The Nazi regime began expropriating Jewish property, and so the Einstein brothers had to sell the property at Ulmer Straße 135 at a very low price. In addition, they had to hand over their valuables such as gold and silver in 1939. These events made the extended Einstein family aware of their situation and they decided to leave Germany together. However, since the brothers could not imagine emigrating separately and they could not find a country that would accept them all together, these plans came to nothing.20 But Brunhilde, who had worked as a nanny in Cologne for a while after school, emigrated to England in 1939. There she worked together with her cousin Liese Einstein (who had also emigrated) in the household of a family in Manchester.21

For their parents and for the other Jews in Germany, the situation deteriorated considerably. From the beginning of 1940, Hermann Einstein, like his brothers, was made to work for Augsburg companies as a forced laborer.22 In November 1941, the first Augsburg Jews were deported. From this point on, the family lived in constant fear of being deported. In January 1942, Mina and Hermann moved to Ulmer Straße 121, into the house of Samuel Einstein, Hermann's brother, who had died three years earlier. Several other Jews had already been given emergency quarters in that house. From February 3, 1942, Mina, together with her sister and Lydia Einstein, the wife of another of her husband's brothers (Moriz Einstein), also had to do forced labor in the Augsburg balloon factory. Mina's brother Siegfried, together with his wife and two children, was deported from their hometown of Nuremberg to the Izbica ghetto in March 1942, and they are considered missing ever since.23 The first family members of the extended Einstein family living in Kriegshaber were deported to Piaski in April 1942.24 On July 31, 1942, Mina's and Ida's mother Ernestine Schlossberger was taken to Theresienstadt.25 From September 9, 1942, Mina and Heinrich were forcibly quartered in the apartment in the house of the synagogue at Ulmer Straße 228, where Moriz and Lydia Einstein had already lived for a few months. On March 3, 1943 the forced labor ended and as early as on March 8 or 9 the couple was deported. After a five-day stopover in a camp in Berg am Laim near Munich, Mina Einstein was deported to Auschwitz along with her husband, her sister and her sister's husband, and another Einstein couple.26There, along with many other Augsburg Jews, they were in all probability led to the gas chambers and killed shortly after their arrival.27

Her mother also did not survive the Shoah; she died in Theresienstadt on November 1, 1943.28 Of Mina's direct relatives, only her daughter Brunhilde survived. She emigrated from England to the USA and married Martin Lehmann, who came from Rothenburg ob der Tauber, in 1949. At the beginning of the 1950s, she received a small part of her parents' confiscated property back upon application.29 She worked as a masseuse and later in her husband's butcher shop. She died in New York in 1994, leaving behind no children.30

This is an excerpt from the biography that Josua Neumann prepared in the winter semester 2013/14 at the University of Augsburg. Josua Neumann participated in the seminar on "National Socialism in Augsburg – The history of prosecution reflected in biographies of Augsburg Jews" led by Dr. Benigna Schönhagen in the department of European Ethnology.